Blockchain technology is going to spark a digital revolution in the coming years. With a CAGR (compound annual growth rate) of 56.3 per cent, the blockchain market is anticipated to grow from $7.18 billion in 2022 to $163.83 billion in 2029. The future of this  technology is bright and new jobs are opening in this field every day. For aspiring professionals, the timing could not be sweeter to choose this career path while the technology is in its growing phase. And what better way than get a head start by preparing yourself to ace the blockchain developer interview?

In this article, we will take you through some of the key questions and answers to help you become industry-ready!

How to Prepare for a Blockchain Interview 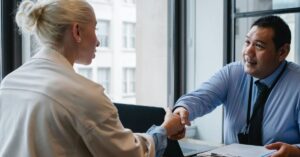 Aspiring professionals and newcomers can succeed in cracking blockchain interviews with necessary technical knowledge and strong logical reasoning skills. We have outlined a few steps that candidates must take while preparing for an interview:

Learning the fundamentals of programming languages and using them to create applications is the key to becoming a blockchain developer. Hence, it is pivotal to work on your software design skills and learn high-level programming languages like Java, C++, Solidity, Python, Golang, and Ruby.

2. Get Familiar with Blockchain Platforms

Without any knowledge of the well-known blockchain platforms, it can be difficult to pass a blockchain developer interview. To understand how a blockchain platform functions, you must first learn about the principles of Ethereum, Hyperledger, Bitcoin, Multichain, and Corda. These platforms use smart contracts and consensus to work on real-world projects.

Last but not the least, you should have a thorough understanding of consensus, cryptography and smart contracts. These digital contracts automate the execution of a contract. However, they only function when predetermined requisites are met. On the other hand, cryptography is a procedure to secure information that enables the sender and recipient of a message to view its content. In addition, a consensus is a general process that helps to build agreement among all the nodes.

1. What are the Various Types of Records Allowed on a Blockchain?

Blockchain technology does not place any limitations on the kind of records that can be maintained. This technique is used by various industries to secure many kinds of documents.

To name a few, the typical record types that can be stored in blockchains are:

2. Explain the Transaction Validation Process on the Bitcoin Blockchain.

The transaction validation process on the Bitcoin blockchain operates in the following manner:

3. How do You Explain Blockchain Technology to Someone Who Doesn’t Know it?

Blockchain technology is a distributed ledger that maintains transactional information in the form of immutable or non-modifiable entries (referred to as blocks) which are encrypted using cryptography.

Let’s consider an example of a school, where blockchain is analogous to a student’s digital report card. Imagine that each block has a student record that is identified by a label that includes the date and time when the record was entered. The specifics of that block and the record of report cards cannot be changed by the student. Additionally, the student holds a public key that enables him to view and access the report card at any time, while the teacher owns a private key that enables him or her to create new records. In essence, the student only has the right to access the record; the teacher, however, owns the right to alter it. The data is safeguarded in this manner using the technique.

4. How Would You Describe Blocks in Blockchain Technology?

5. What is the Difference Between the Bitcoin Blockchain and Ethereum Blockchain?

Despite the fact that Ethereum and Bitcoin are both considered to be digital currencies, the Ethereum blockchain is very different from the Bitcoin blockchain. Bitcoin was developed specifically to function as a digital currency. On the other hand, the blockchain technology used by Ethereum is advanced, scalable, and can be used in smart contracts. Bitcoin blockchain uses the SHA-256 algorithm and has a block time of 10 minutes, whereas Ethereum uses the Ethash algorithm and the block time is 12 to 14 seconds. This makes Ethereum more reliable than Bitcoin.

6. What is Cryptography? What is its Role in Blockchain?

With the use of a hash function, blockchain leverages cryptography to protect users’ identities and ensure that transactions are completed securely. Data is encrypted and decrypted using public and private keys in cryptography. A private key (much like a password) is kept hidden by the users on the blockchain network but a public key can be shared with all Bitcoin users.

2. What is a Smart Contract? List Some of its Applications.

A smart contract is a ‘self-executing’ contract that includes the terms and conditions of an agreement between peers.

A few examples of applications are:

3. How is the Hash (Block Signature) Generated?

The steps involved in creating a block signature are as follows:

One of the leading platforms for creating blockchain-based applications is Ethereum.

5. What is the Nonce and How is it Used in Mining?

In cryptocurrency, a nonce is an abbreviation for ‘number only used once’, which is a number added to a hashed or encrypted block in a blockchain. It is a random 32-bit number that miners use as a base for their hash calculations. Miners compete with each other while trying to guess a valid nonce as they attempt to calculate a block hash to receive the block reward.

ALSO READ: What is Blockchain Technology: A Comprehensive Guide to Careers in Blockchain 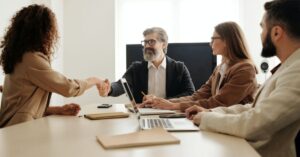 1. Explain Why There is a Fixed Supply of Bitcoins?

Bitcoin inventor Satoshi Nakamoto created this cryptocurrency to resemble digital gold and set a limitation on its supply to mimic the limited amount of physical gold. The most Bitcoins that can be issued or mined is 21 million. To guarantee a currency without inflation, the Bitcoin supply cap is one of its motivations. As they are meant to be used for transactions, much like paper money, too many Bitcoins on the market would cause irrational price swings.

2. What is DApp or Decentralised Application?

A program that runs on a distributed computing system is known as a decentralized application (dApp). Decentralized applications, or dApps, are not required to operate over a blockchain network. DApps have gained promising popularity in recent times with the rise of distributed ledger technology (particularly on Ethereum where dApps function well).

3. What is the RSA algorithm?

The Rivest-Shamir-Adleman consensus algorithm is referred to as RSA. It is an asymmetric algorithm, implying it has two different keys—a public and a private key—crucial for encrypting and decrypting messages by using modern computers.

4. Explain a Real-Life Use Case Where Blockchain is Being Used.

A real-life use case of blockchain includes the application of smart contracts in supply chain management to offer ongoing validation and transparency of transactions when handled by numerous supply chain parties.

5. Differentiate Between Proof of Work Vs Proof of Stake.

The following are the fundamental distinctions between the proof of work and proof of stake:

Proof of work (PoW) algorithm is used to verify a transaction and add a new block to the chain. With this algorithm, miners compete against each other to accomplish the network transaction. It involves an expensive computer calculation. In this, the first miner to solve a block’s problem receives a reward.

In the case of the proof of stake (PoS) algorithms, a number of nodes decide to stake their own cryptocurrencies to validate transactions. These are known as ‘stakers’. Proof of stake involves the deterministic selection of a new block’s creator based on the block’s wealth, which is referred to as ‘stake’. Since there is no block reward, miners only receive transaction fees. Compared to proof of work, proof-of-stake is more cost-effective.

A 51 per cent attack in the context of blockchain is a vulnerability where one person or group of individuals has control over the majority of the mining power (hash rate). Attackers can thwart the confirmation of new transactions in this way. Moreover, they can also double spend the coins. Smaller cryptocurrencies are targeted in a 51 per cent attack.

According to Glassdoor, the top five companies in the U.S. that offer high-paying jobs to blockchain developers are:

ALSO READ: What is the Best Blockchain Developer Salary and How to Get it

Embark on a Learning Journey with Emeritus

The world has started to leverage the power of blockchain and various industries are pooling talent to stay ahead. With these blockchain developer interview questions and answers, aspirants will be able to sail through interviews with confidence. However, if you want to explore more opportunities in this growing field and launch a career with a lucrative blockchain developer pay, enroll in Emeritus’ online technology courses to gain in-depth knowledge and expertise needed to ace!