Do you ever stand back and take a hard look at the volume of waste you put out for disposal every day? If you haven’t done this exercise, let’s give you a ballpark figure to work with. The world generates 2.01 billion tonnes of municipal solid waste annually as per the World Bank. Needless to say, we are producing waste at a pace much higher than the planet can decompose. And it’s not just the industries but our ‘produce, use, and discard’ culture that is responsible for this vicious cycle of waste production. The solution to this problem is a long-advocated move toward a circular economy. So, what is a circular economy and how does it help businesses? Let’s explore that with some examples.

What is a Circular Economy? 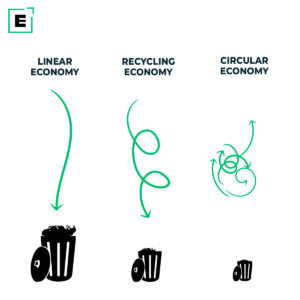 According to the World Economic Forum, a circular economy is “an industrial system that is restorative or regenerative by intention and design.” Therefore, it may be an oversimplification to relegate the economy to the age-old reduce-reuse-recycle approach. Instead, it is a larger concept that, in restructuring the system, demands an overhaul of the established production and consumption patterns.

In his paper titled The Product-Life Factor, Walter Stahel, Founder and Director of the Product-Life Institute, Geneva, put forth the concept of a closed-loop economy. This, in turn, laid the foundations of what is a circular economy. Here, he argued for a gradual transition towards sustainable living by increasing the utility of products and reducing the pressure on natural resources. A circular economy transforms goods nearing the end of their useful life into resources for reuse. Furthermore, closing the loops in the industrial mechanism substitutes production for sufficiency and workforce for energy. Therefore, a circular economy significantly diminishes greenhouse emissions, empowers the workforce, and results in a low-carbon economy.

Circular initiatives differ from the linear system in how value is created and preserved. In the latter, the movement of raw materials to the finished product and ultimately to the landfill is unidirectional. Such an economic system is fuelled by profit margins and quantity, rather than effectiveness and quality. On the other hand, the circulatory system is optimized for maximum value preservation through reuse, be it of products or their components. Therefore, it entails a movement from excessive manufacturing to resource efficiency.

The two economic models differ greatly in their approaches to sustainability. Linear economies endorse eco-efficiency and strive to minimize ecological damage to reach the same objectives till it overloads the system. In a circular economy, however, not only is the ecological impact minimized but it is also positive. This includes economic and social welfare as well.

Moreover, a circular economy shifts the onus of natural restoration and preservation from developing and fringe communities to developed countries. The effects of ecological degeneration are disproportionate: 74 of the poorest countries are the hardest hit by the climate crisis but contribute to less than one-tenth of global greenhouse gas emissions. A circular economy is a potential solution to this deeply unfair predicament, one that is only furthered by a linear system.

What are the Different Models of Circular Economy?

There are two circular economy models: one encourages reuse through remanufacturing and repair, and the other employs recycling to create resources. In a human-centric model, owners become custodians, and users have the agency to become creators. This, in turn, creates jobs at the local level, thus positively impacting employment.

For instance, have you noticed that a well-known clothing brand H&M offers discounts to customers who return old clothes from the brand that they are going to discard? H&M recycles these discards to make new clothes and sells them at a higher price point as ‘sustainable fashion’. This is a win-win for the planet and the company. Firstly, the brand has reduced wastage and gained a good reputation for it. Secondly, they have incentivized the customers to gain their loyalty. Thirdly, they have targeted the market segment that buys sustainable clothing. All this at once! This is an example of the agency-centric model.

Why is a Circular Economy Important?

A circular economy gains immense significance in the face of unprecedented climate change. As the United Nations’ International Resource Panel noted, a major contributor to greenhouse gas emissions is the extraction and processing of natural resources. By prioritizing material recovery over material production, circularity reduces the impact of such emissions.

When implemented correctly and inclusively, a circular economy has the potential to protect an endangered environment, foster social equity, and boost sustainable economic progress. Furthermore, it offers respite for vulnerable communities who face disproportionate threats of displacement and extreme poverty under the present system.

A circular economy also imbues businesses with a greater sense of corporate social responsibility, which is actionable and trackable. Such benefits result from the three foundational principles of a circular economy:

Moreover, disengaging finite resources from economic progress offers resilience that is advantageous to the environment, human welfare, and business.

How Does a Circular Economy Work?

Once viewed as a utopian concept, a circular economy is fast gaining traction as one of the most promising solutions to sustainability issues. Despite diverging opinions, sociopolitical barriers, and amorphous definitions of the term, it has recently spurred businesses, governments, and individuals to action. But how does a circular economy function?

As opposed to the current linear economy, the circular model emphasizes retaining the value of goods, transference, and continuous utility. Within the model, there is little place for wasteful economic activities that harm human life and endanger the planet. Doing so, greatly mitigates pollution and congestion.

A circular economy has a hawk-eyed focus on designing goods that are inherently reusable, recyclable, and fit for remanufacturing. The idea is to keep materials in circulation for as long as possible, thus using a variety of them in different ways instead of simply disposing of the elements.

By taking the spotlight away from fossil fuels and non-renewable sources of energy, a circular economy aims to regenerate the ecosystem and foster preservation. In practice, it actively replenishes the soil by returning valuable nutrients often lost in the present economic model. Therefore, the environmental benefits of a circular economy are undeniable and quite easily achieved if executed mindfully.

What are the Barriers to a Circular Economy?

Despite the increasing spotlight on circular economies, implementation has been slow. In addition to the lack of awareness, competence, and the right mindset, economic factors greatly hinder the growth of circular solutions.

Some of these challenges are:

However, the most significant barrier to circular economies is that it needs an extensive and well-functioning supply chain, which becomes difficult due to the unavailability of raw materials. Material is insufficient, in terms of quality as well as quantity, for recycling and reuse. Further, even in the case of availability, it is inefficiently handled by fragmented parties which sabotage the process. These factors lead to uncertainty and feasibility issues coupled with high transaction costs and a lack of universal market standards.

What is the Environmental Impact of a Circular Economy?

Although there’s a long way to go in implementation, the Ellen MacArthur Foundation has already noted several case studies that reflect the environmental benefits of a circular economy. Spanning a range of industries and sectors, the circular economy has made good on its promises of sustainable business, inclusivity, social justice, and human welfare. Let’s take a look at some of the examples.

In the field of biodiversity, the Orongo Cattle Station in New Zealand has restored degraded land using sustainable design, leading to more profits simultaneously. Many players in the food industry, like De Clique, are now striving for zero-waste production processes while São Paulo is investing in circular practices by supporting local agriculturists. According to the Ellen MacArthur Foundation, two-thirds of the global population will live in cities by 2050, consuming 75% of the world’s natural resources. However, cities like Cape Town and Austin offer a silver lining in their attempts to transition to circular economies.

The ecological impact of a circular economy is clear by now. Reducing waste and shifting to recycling make way for a greener future and sustainable business growth. So we may as well place our bets on it as the only viable solution to the looming threat of irreversible climate change.

Want to learn more about circular economy and business sustainability? Head over to Emeritus’ sustainability courses to delve deeper into the subject!