The ethical hacker has become an essential asset to the information security departments of all top organizations in the world. Wondering why that is? According to Statista, approximately 15 million data records were exposed through data breaches in the third quarter of 2022. With the number of breaches on the rise, organizations needed to find a way to safeguard their data resources and expose security vulnerabilities. Enter the ethical hacker.

Evolution of Ethical Hacking and its Future Scope

Hackers are generally seen as criminal elements who steal data, sell it, or use it to extort individuals. Ethical hackers, on the other hand, protect organizations from such hackers. This makes them an important part of an organization’s security toolkit. Let us find out why.

Who is an Ethical Hacker?

Ethical hackers are commonly referred to as white hat hackers. They are skilled information security professionals adept at identifying and exploiting vulnerabilities in a target system. They work on penetrating computer systems, networks, and other computing infrastructure in order to expose vulnerabilities to help owners better protect their resources. Organizations employ them as cybersecurity experts to prevent becoming easy targets for malicious entities with similar skills.

ALSO READ: Why Cybersecurity Threats are Rising and how to Fight Them 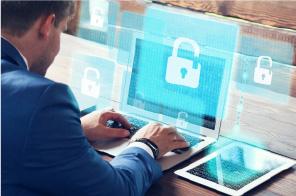 Ethical hacking and penetration testing are both used to discover vulnerabilities in an organization’s cybersecurity infrastructure but there are certain differences between the two.

Penetration tests are assessments carried out by third-party contractors. The organization that hires the testers defines the scope of the test. Ethical hackers, on the other hand, are not limited by any scope and carry out various types of cyberattacks on the client’s entire system.

How Did the Role of the Ethical Hacker Evolve

In the 1980s and 1990s, the computer started becoming an increasingly popular choice for individuals and businesses to store a large amount of data. Hackers became a term for individuals willing to use their skills to infiltrate computers, steal data, and even extort businesses for large amounts of money. The first ethical hackers emerged when businesses realized the merit of utilizing the skills of hackers who had been caught to expose vulnerabilities in the defenses of their infrastructure.

What Will the Career Opportunities for Ethical Hackers be in the Future?

The (ISC)² Cybersecurity Workforce Study claims that there is a global shortage of 3.4 million people in the cybersecurity workforce. Clearly, the scope for ethical hacking as a career is very high and there are plenty of jobs in the space worth exploring.

Some of the job roles you can explore are as follows:

ALSO READ: Why is a Good Cybersecurity Culture Good for Your Company

Ethical hacking requires specific skills that you need to spend time training to master. Thankfully, today, a number of certifications are available to develop a strong arsenal of hacking skills. Taking up the proper cybersecurity certification can help you enter this profession. Several job opportunities for ethical hackers may require an interdisciplinary Master’s Degree in IT or an interdisciplinary tech/security degree. It is also wise for hackers to get familiar with technologies like Cisco network controls, virtual machines, Citrix, and Microsoft Exchange. Consider a course from Emeritus to help develop these skills.

Here are some of the questions which are commonly asked when discussing ethical hackers:

1. What do Ethical Hackers do?

2. What is the Ethical Hacker Salary Range?

3. Is Ethical Hacking a Good Career?

According to the U.S. Bureau of Labor Statistics, employment for information security analysts has been predicted to increase by 35% between 2021 and 2031. Clearly, there is plenty of demand for ethical hackers in the market. If you have the right skill set to meet the needs of ethical hacking jobs, this career path can prove to be extremely fulfilling.

4. Is it Easy to Become an Ethical Hacker?

Ethical hacking is not very difficult but it requires a high level of skill. You can develop these skills by taking up courses in cybersecurity.

If you want to enter the exciting world of cybersecurity, becoming an ethical hacker is a great way to do so. Learn to fit the role by upskilling today. Check out cybersecurity courses from Emeritus to expand your skill set.