Lenin famously said, “There are decades where nothing happens, and there are weeks where decades happen.” The years between 2020-22 certainly had decades of change packed into them. While everyone grappled to hold on to their staples in a fast-changing world, some chose to play it differently. Emeritus learner Omoyemi Oni was among the latter group as he navigated three big life changes — a new country, a new skill, and an all-new career — in this time.

Oni, who worked in content production, moved to the U.S. from his native country in Nigeria during the pandemic. But that was not all, he also transitioned into a new career as an extended reality game producer in his new country. A whole gamut of his transferable skills helped but one of our UX design courses — Professional Certificate in UX Design for AR/VR from NYU Tandon School of Engineering — gave him new skills he needed to break into his new career.

We caught up with Oni, who is now a Game Producer at Zollpa, to trace his journey into a ‘new immersive world’ of gaming and understand how learning again helped him achieve his goals after a decade-long career in producing content. 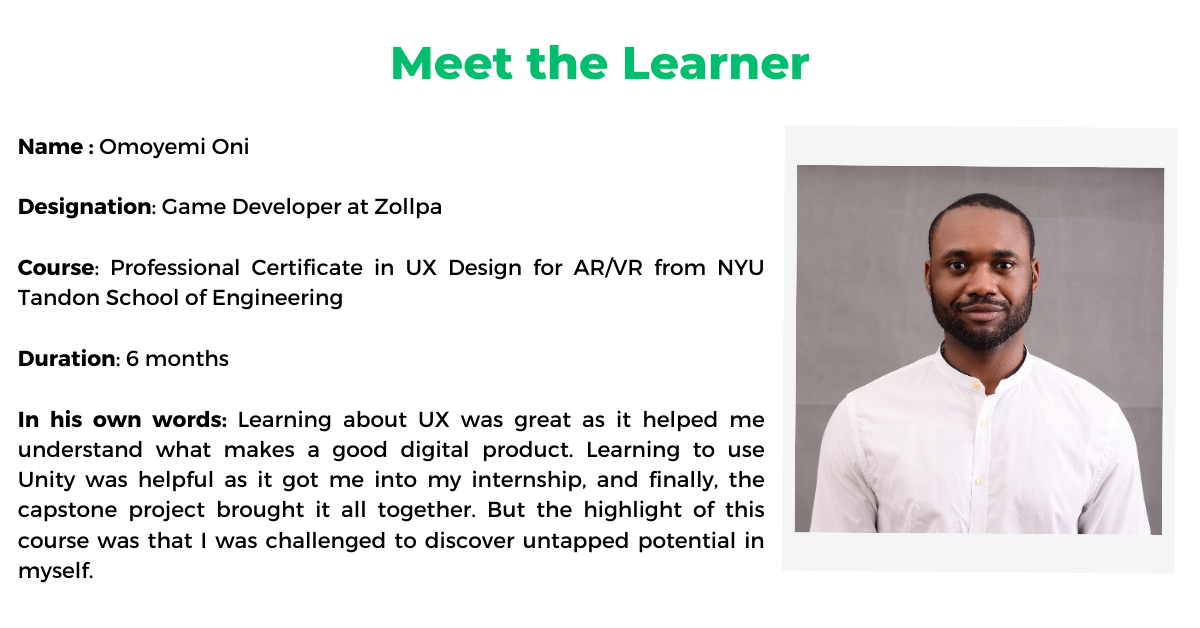 “At my core, I am a content creator and love to build experiences.”

“I have created content in all kinds of formats — video, audio (on radio), blogs — for over ten years. A major chunk of my work spanned the African continent and I have worked in all kinds of roles that include production management, content, client services, and everything in between,” says Oni.

Of all the great work Oni has done, what we found most interesting was his stint as an entrepreneur-cum-content creator on the radio where he co-created a show called String My Naija Wedding that was intended as a platform to educate brides to rationalize costs for their wedding. The popular series had two seasons and also spinning off a blog and a wedding expo called The Wedding Market.

“I noticed that the companies that did well during the pandemic — particularly in the media space — were all digital first.”

When the pandemic was about to hit, Oni was in Lagos, completing a freelance project for a South African advertising agency, and ‘immersing himself in learning a new language — French’. And this is when he had a profound realization that changed the course of his life and career. “I was paying attention (to world events) and the Eureka moment came when I saw what Fortnight did with Travis Scott’s concert. It went viral in a matter of hours!” he exclaims.

This is what opened his eyes to digital technologies and prompted him to take up Agile training. Having done project management in some capacity for his production assignments, this seemed like a logical next step. But, at his core, Oni was still a content creator. He was still searching for the ‘next step’ for his creative side when he moved to the U.S. and this quest brought him to the Emeritus platform though he was still not specifically looking for UX design courses.

“I am not a designer or developer, but this seemed like the perfect course for me!” 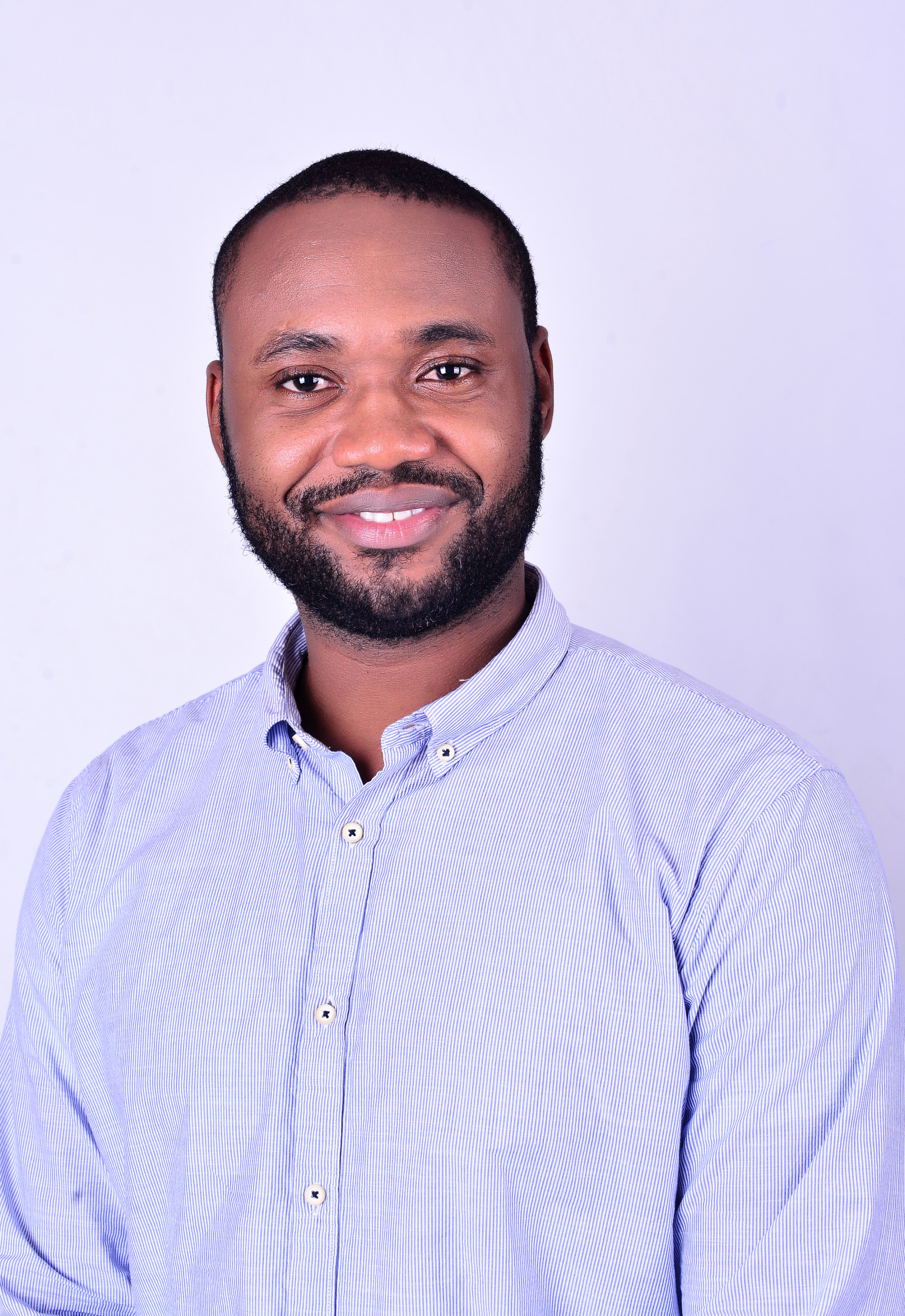 When Oni started searching for courses on Emeritus, he was still unsure of what his ‘ideal course’ would be. But, when he encountered the Professional Certificate in UX Design for AR/VR from NYU, one of our best UX design courses, it immediately sparked his interest. “First, the name of the course said “design immersive experiences” and that was cool. Secondly, NYU was an added advantage. Then I realized I had heard of Emeritus as an educational platform while I was in Nigeria. So, it was cool,” he says.

He was rather surprised by his own choice because he was — in his own words — “not a designer” and had no “prior design experience”. But connecting with Regine Gilbert, Industry Assistant Professor, NYU Tandon School of Engineering, convinced him that this “sounded like just the course for him.” And just like that, Oni found the ‘logical next step’ for his career that fulfilled his creative instincts and was also the perfect space to use all the transferable skills from his decade-long career!

“I like that I was challenged by this course to unlock the potential I didn’t know I had.”

And what was it about this course that convinced Oni of its value to his career, and did it actually deliver on its promise?. “Learning about UX was great as it helped me understand what makes a good digital product. Learning to use Unity was helpful as it got me my internship and finally, the capstone project brought it all together. But the highlight of this course was that it helped me discover the untapped potential in myself,” says a very excited Oni.

According to Oni, this is one of the best UX design courses as it gave him exposure to all kinds of platforms — 2D, 3D, mobile, and web — giving him a wider choice of opportunities in the future. Also, the fact that he got to work with people from diverse cultural backgrounds helped him improve his people skills, which is essential for any professional.

“I was rejected in two interviews that I thought I had nailed and that really hit my morale. But the Emeritus team really helped me bounce back.”

So far, this career transition story sounds like a fairy tale but as the saying goes, there are no fairy tales save the ones we write for ourselves. Setbacks are a part of life, and they make us who we are. For Oni, the setbacks came early on in his job search phase. There were a couple of interviews that he thought he had done great at, but he didn’t end up getting hired. “I got good feedback from the recruiters, but it was frustrating. And because of my low morale, I started bombing other interviews,” he confesses.

We can build skills and learn new tools, but sometimes, empathy is all that is needed to help you take that next step. And that is what Oni got from Emeritus Career Coach Carlos B Martini. Oni says to us candidly, “Carlos made me realize that these things happen, and it was not my fault. We did a bunch of behavioral interviews and he believed that was good — I was much better than I thought myself to be. Having that affirmation from Carlos gave me my confidence back.”

By the time the Zollpa interview came along, Oni was going to interviews much more confident and better prepared. And today, he works on emerging tech as a Game Producer for Zollpa!

“I have been a lifelong learner but studying with Emeritus felt like going back to school. However, I am glad that I went through with it.”

Once we join the workforce, life becomes a cycle of deadlines and deliverables. It is really challenging for most professionals to make time for learning. Did the idea of studying again seem daunting? He explains, “I have picked up courses on the side throughout my career, the last being my stint at professional French. But I have mostly done self-study, and the courses were for shorter durations. So, delivering projects week-on-week felt like a lot of work.”

He says that keeping the right frame of mind helped him combat the challenge of ‘going back to school’, which is what doing one of our best UX design courses felt like! “I told myself that I was transitioning in my career and starting afresh has its challenges,” he says. The fact that this career transition coincided with his new life in the U.S. also gave him clarity. “If I am building a new life for myself in a new country, I have to be open to being a student,” he admits. This clarity of perspective helped him sail through the course and then a rather intensive internship too. 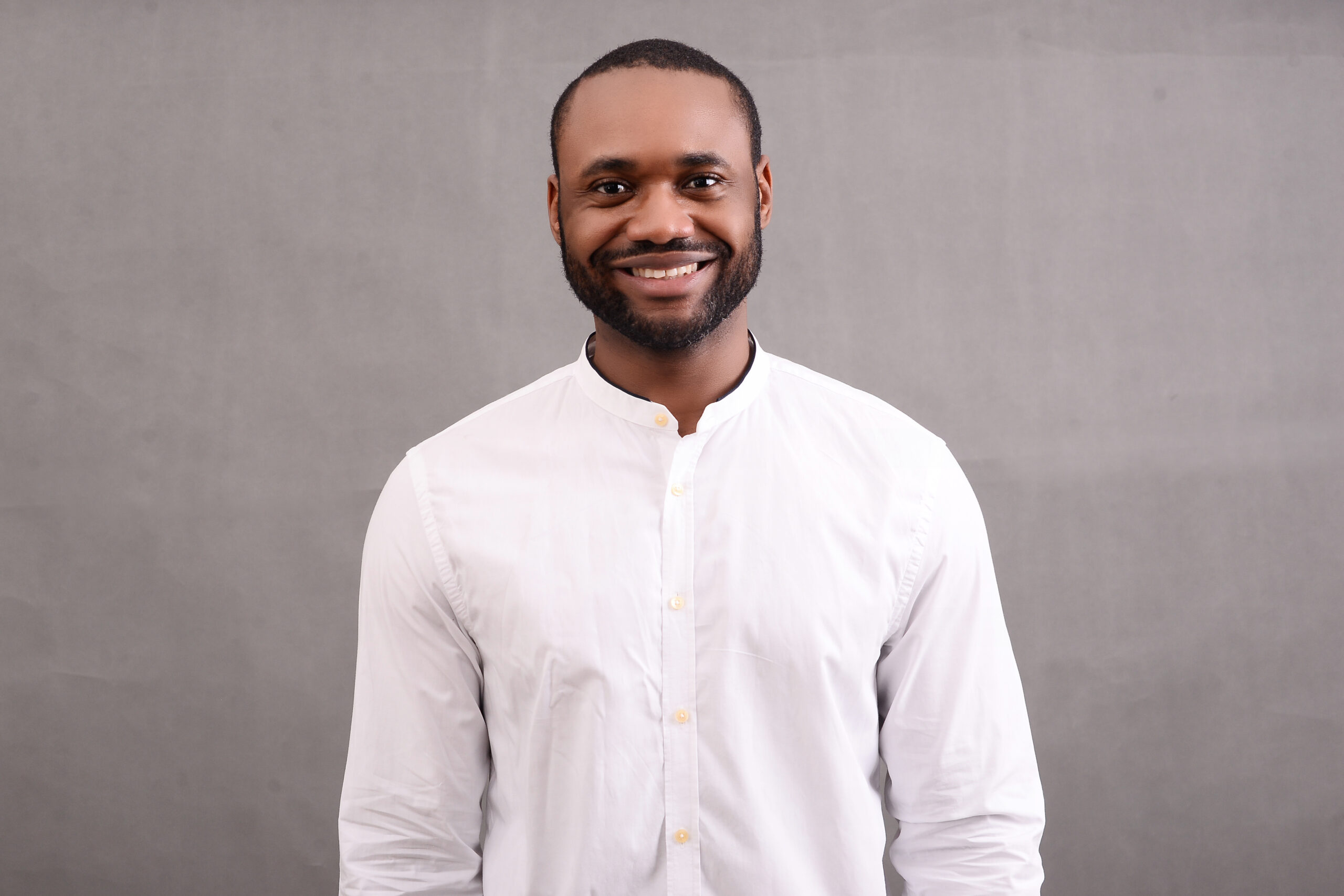 “If you want a career in UX, this is one of best UX design courses for you because it’s intensive, very hands-on, and gives you enough work to build your own portfolio”

UX is a new and evolving field that has many fans. We asked Oni what his advice would be to prospective learners of UX. “Ask yourself why you want to do this course,” he advises. He explains that while the program adds great value to your profile, it was six and half months of intensive work. And he was able to complete the program and keep up with its demands only because he was clear about why he wanted to do it in the first place. With that clear intent, the program was very beneficial for him.

He explains, “By the end of the program, I had done enough professional-level work to build my portfolio. It gave me a tremendous sense of achievement. Even today, I am not ashamed to send out that work to potential employers.”

On that note, Oni adds that moving to a new country and starting a new career is not an easy life choice. “I was raised by a single mother, and I have a sister who lives and works in Toronto. The massive family support I have been lucky to have back home in Nigeria and here in the U.S. gives me the mental fortitude to do what I have done,” he says. While his family gave him confidence, the Professional Certificate in UX Design for AR/VR from NYU Tandon School of Engineering gave him the tools and know-how to achieve his dreams.

Emeritus Careers affiliated with the Professional Certificates offers a complimentary and optional Career Development course to participants and helps them access additional, individualized career coaching and resume referrals to employer partners. We have partnered with organizations like TTEC to connect with prospective employers. Brands who are looking to reach out to great talent like Omoyemi Oni can learn more here.