Learning a new skill like coding can help people put food on the table. It can, in many cases, decide whether someone can afford education for their children or not. It was Diane Kris’ tweet that drew our attention to women in coding. For the uninitiated, Kris is a software engineer working for Tumblr and she was part of the debut cohort at Girls Who Code. This is an organization that is committed to bridge the gender gap in technology jobs by empowering girls between 13 to 17 years of age. Kris tweeted:

girls who code literally took me out of poverty, ask my filipino mother. for every 1 girl you teach how to code, she brings 3 more girls in. we're doing that with crypto and we're leaving no girls behind

Coding is often considered a silver bullet that can end all your woes. And recently, there has been much talk about the need to initiate women in coding jobs to fill a gender gap that will keep growing, if not addressed. And then we faced this disturbing statistic — women comprise only 14% of software engineers in the workforce. That is not a gender gap but a gender ‘chasm’. Was this gender ratio of women in technology always skewed or did it get distorted somewhere down the line from when the first computers arrived and disrupted the universe? To find out, we went back to the beginning.

History of Women in Coding 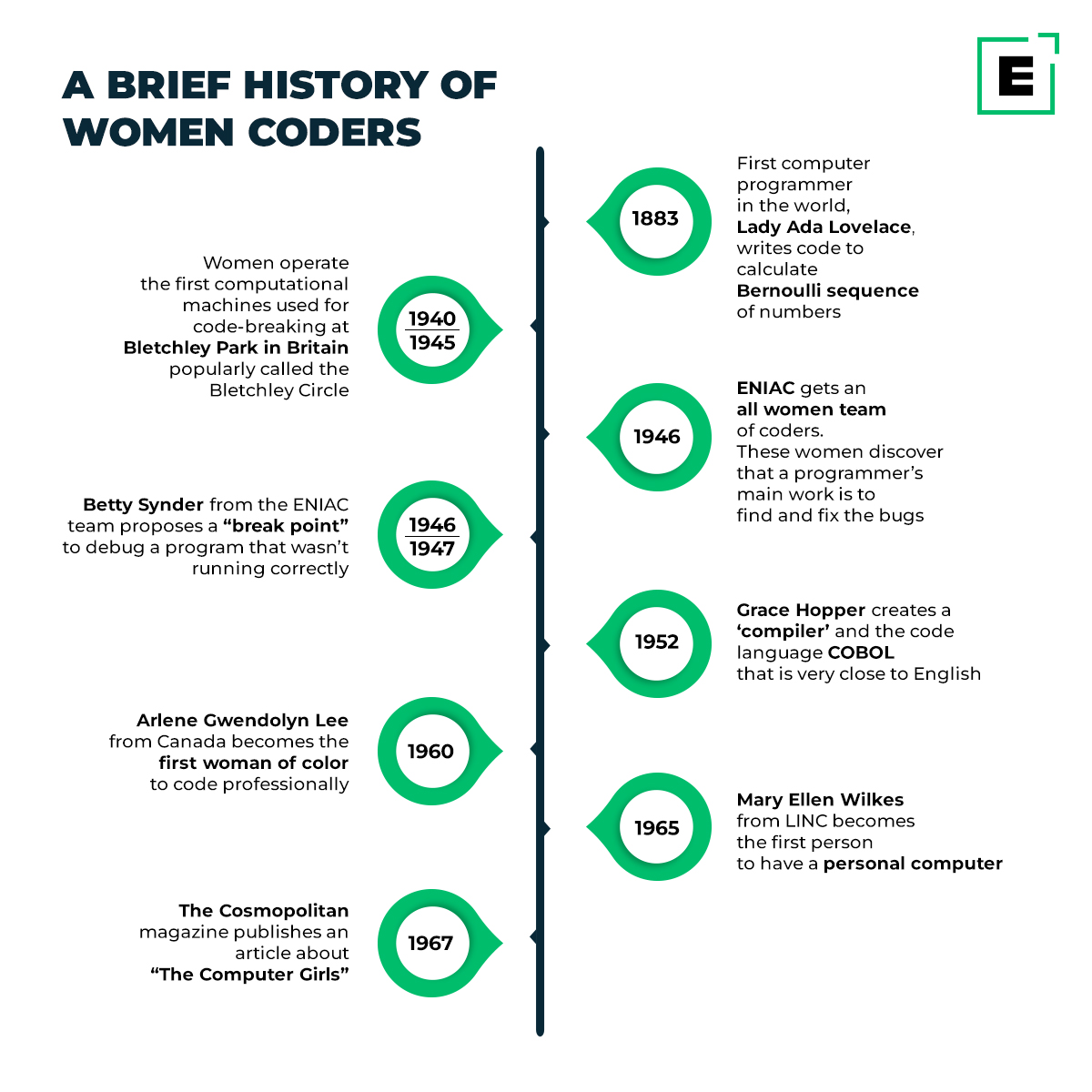 The popular, and somewhat stereotypical, image of the disheveled and reclusive male coder was not always the norm. In the 1940s, coding was considered a job that required precision and careful repetition. It was seen as something akin to knitting or diligently recreating a layered recipe from a cookbook, as women often do. Not that women lacked the inventive spirit; the first code in the world was written by a woman, Lady Ada Lovelace. She wrote a code to calculate the Bernoulli sequence of numbers for a Analytical Engine proposed by mathematician Charles Babbage. Though the machine never saw the light of day, Lady Ada’s code is the first of its kind.

During World War II, women pioneered code breaking using huge computer-like number-crunching machines. Their contribution to the war effort is well documented in movies like The Imitation Game and The Bletchley Circle. Post the war, computers moved from being a military secret to a disruptive scientific invention. Computers were new; so, labs and companies alike looked for nothing more than the right aptitude to train women in coding. This opened the doors for many talented and famous women coders in the 1950s and 1960s.

Where did the women in coding go? 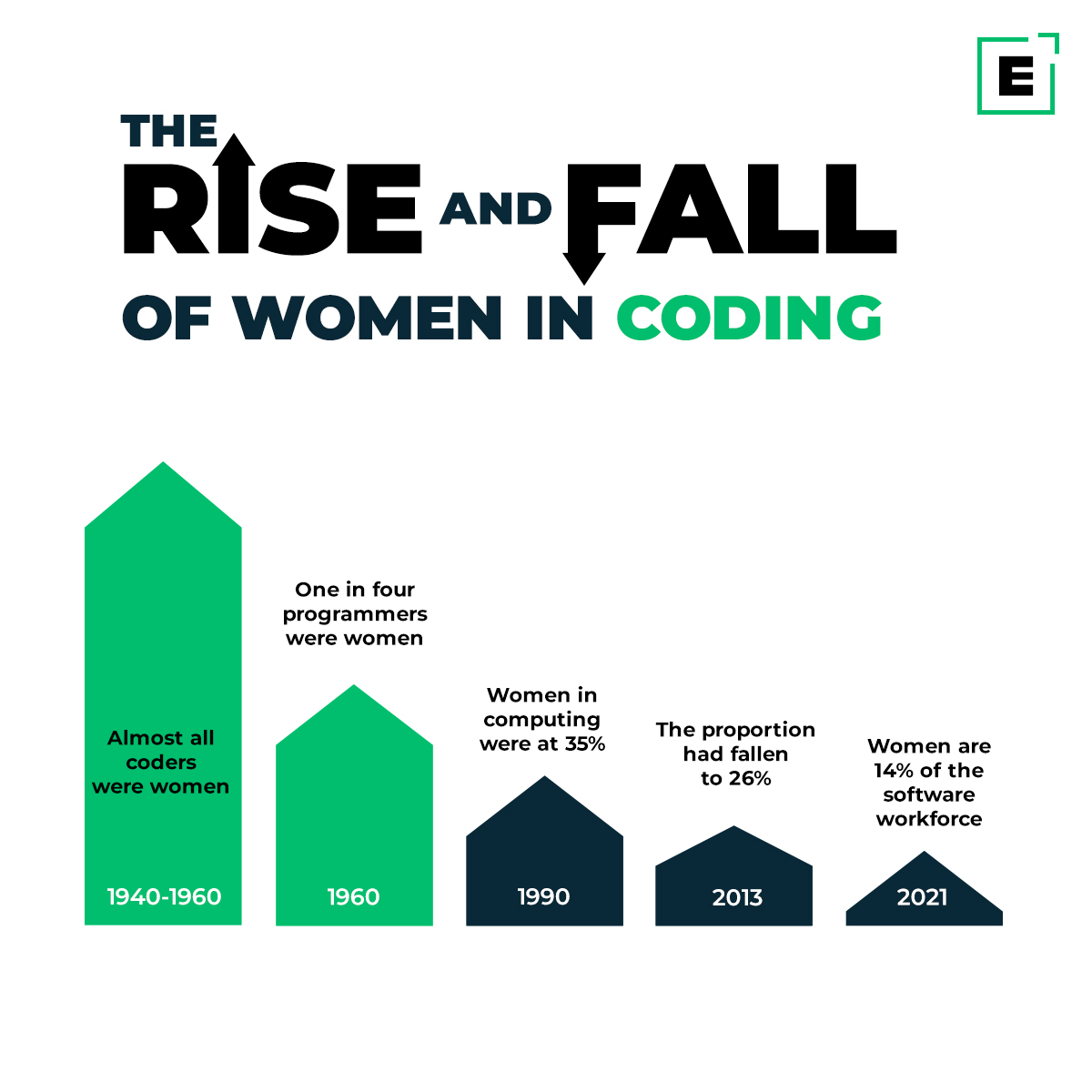 Looking at the list of famous women coders and the timeline above, it’s only natural to wonder what happened to all the women in coding from the 1990s! A New York Times article titled A Secret History of Women in Coding lists some very pertinent causes for the dwindling number of women coders:

Coding, despite great demand, was considered a menial or rather secretarial job till the ‘70s. But, as soon as coding started being perceived as cerebral, men, not women, were considered better suited to it. Looks like society pulled a Rosie the Riveter on women coders!

In the ‘80s, most American homes started having personal computers (PCs). These PCs were most often installed in rooms of boys, not girls. Like baseball, computers became a source of male bonding among fathers and sons or friends. So, when boys came to coding courses in college, they were already way ahead of their female counterparts.

In the ‘50s and ‘60s, both men and women who trained in coding had never seen a computer before. So, women students got admission into courses on the basis of nothing more than an aptitude test. By the ‘80s, the demand for coding courses had snowballed and the universities had to add testing criteria for selection which ruled out many women students who had no prior experience with coding.

The vibe in campuses and in the job market was that you needed to code obsessively to be a good coder. This is when the prototype of a reclusive and nerdy coder with screen tan became itched in our collective consciousness. While this persona fitted men very well, it wasn’t acceptable for women to exhibit these characteristics.

The result? Fewer women applied to professional coding courses; even fewer graduated due to drop offs. And finally, the small number that made it to the job market did not end up getting a fair share there as well.

How can more women learn coding?

History may not have always dealt women a fair playing hand when it comes to coding professionally. But technology has leveled the playing field to a great extent. The constructive efforts by many organizations are also adding momentum to attempts at correcting this gender imbalance.

The following are some of the commendable highlights in the journey to having gender parity in coding jobs:

Coding is a skill like any other and it cannot be completed without basic tools. Aspiring coders must learn to code. So, Girls Who Code catch them early between 13-17 years of age. Their summer programs are completely free and require registration only.

The TinkerHub Foundation, based out of Kerala in India, has introduced an interesting concept of peer-to-peer learning that can help students on campuses learn new technologies from peers by picking up a problem-solving approach. The CEO of TinkerHub, Mehar Mossa tells us, “In India, we study to get a degree and then a job. But that cannot be the end of learning when technology is growing so fast. That culture needs to change.”

Mossa started the Women in Technology wing of TinkerHub encouraged by the response he got from women on campuses. “We have the highest engagement from women participants for any tech events”, he explains.

It is no secret that coding as an industry has highly paid jobs. So, learning to code properly can change someone’s life. Imagine if you could learn a new skill and start a new career without any prior experience with coding. And we at Emeritus, an edtech company and a ‘good unicorn’, are empowering women to learn coding in our own way.

Apart from the efforts mentioned above, success stories of other women coders can be a very strong impetus for more women to learn coding. So, we caught up with women from diverse backgrounds who have mastered the art of coding to know more about their inspiring journeys.

Ashley Goldstein was an art teacher until recently. She studied art history in college and had no background in coding whatsoever when she decided to enroll in New York University’s Professional Certificate in AR/VR Development and 3D Graphics with Emeritus. “Extended reality is such a visual concept! I think my art background really helped me understand the UX part of it better,” she explains, dispensing with any stereotypes we might have about right/left-brained people who can either code or paint!

Emily Lubkert from North Carolina also comes from a teaching background and was looking to switch her career path. With two kids, she needed a job that had slightly more flexible timings than a school. She took the Professional Certificate in Coding: Full Stack Development with MERN from MIT xPRO without too much experience in coding. “I had a computer paper in college. But I never pursued it professionally so I assumed that door was shut,” she says. However, six months, a course, and some networking later, she is on her way to a new career! “I have been told that this is a good time to be a woman coder as a lot of companies are trying to correct the gender imbalance’, she says.

Ananya R, a 24-year-old coder who works as a Community Manager at Google Developer Relations, told us that India has a unique problem. “Enough number of women study technology in India. But, they don’t pursue it as aggressively as men. Women usually leave tech careers after they get married or start a family,” she explains. Ananya, for the last one year, is trying to address this gender imbalance in her own way by working with Women in Technology, the women’s wing of TinkerHub. She conducts workshops in campuses and motivates more female students to take up coding seriously. “We have to put a face to women in coding. Only then can the girls relate,” she sums up, rather aptly.

You can explore more coding programs on Emeritus, here.