According to Stack Overflow’s developer surveys for 2022, Java is one of the top 10 most commonly used programming languages and a popular choice among people learning to code. It can be found in almost every operating system and application. Its ease of use and versatile nature makes Java a favored programming language among small and large businesses, including big tech corporations like Google, Twitter, Netflix, Amazon, Meta, LinkedIn, and Amazon.

Learning Java can make you eligible for a wide range of lucrative job opportunities across the industry. According to the U.S. Bureau of Labor Statistics, the employment of software developers, quality assurance analysts, and testers, is projected to grow 25% from 2021 to 2031, with 162,900 job openings each year on average over the decade.

Java developers are among the most in-demand and highly-paid professionals in the tech industry. According to Glassdoor, the average annual salary of a Java developer in the U.S. is $98,560. A Java developer also ranks at number 9 in Glassdoor’s list of top 50 best jobs in 2022, with a job satisfaction rating of 4.1 out of 5.

Apart from the lucrative nature of the profession, here are the top 10 reasons why you should learn java programming.

1. Java is Easy to Learn

Java is beginner-friendly and one of the most popular programming languages among new developers. It has a syntax similar to English and enables you to write, debug, compile, and learn java programming fast.

Java follows the ‘write once and run anywhere’ principle and can be used for programming applications using different platforms. It has various features such as data binding, platform-independent characteristics, dynamic coding, and multiple security features, making it a versatile programming language. 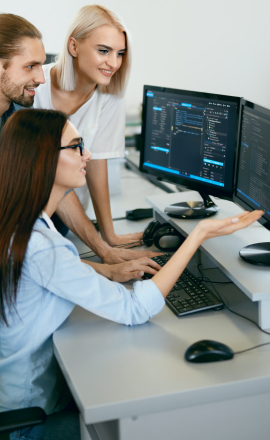 Java is used everywhere, including desktops, mobile, applications, and so on. It can effectively run on any operating system and is ideal for building applications. This scalability and versatility have made Java a game-changing language across multiple sectors and devices.

Java has the ability to easily move across platforms and can be run similarly on different systems. This critical nature of being platform-independent at the source and binary levels makes Java an essential language to learn for developers.

Java has a rich Application Programming Interface (API) system that includes packages, interfaces, and classes, along with their methods and fields. This enables developers to integrate various websites and applications.

Most of Java’s features are open-source; this makes building applications cheap and easy. Java has the support of libraries like Google Guava, Maven, JHipster, and Apache Commons, allowing developers a wide choice to work with.

The various Integrated Development Environments (IDEs) available in Java is a significant reason behind it being among the most sought-after programming languages. Java’s IDEs—Netbeans, Eclipse, IntelliJ, and Android Studio—provide various facilities for developing a wide range of applications and software.

Java development is a highly lucrative career. With Java proficiency, you can expect great job opportunities, salary packages, and job satisfaction. Additionally, with experience and credentials, you can progress to higher-paying roles and job opportunities.

Is Java Easy to Learn?

Compared to other programming languages, Java’s simple English-like syntax enables learners to write, debug, and compile the language. Furthermore, since it is free to download for personal use, you can easily access, practice, and learn Java programming.

Java provides an exceptional opportunity to grow and develop—whether you are working in big tech or a small company, or if you are a professional developer or a new learner. If you want to enhance your skill set further and advance your career, explore the wide range of online coding courses offered by Emeritus and learn Java programming from the best in the field.

Previous Post (p) What is Product Management and Why it is a Great Career Choice
Share
Next Post (n) Want to Ace Your Finance Interview? Here's a Complete Guide