As we got to know the inspiring stories of our hard-working female leaders, we came across one who showed unusual grit and tenacity. Someone who, much like many women do, encountered inherent bias and rose above it.

Chu joined Emeritus to work for a cause that is very close to her heart: education. “It levels the playing field for human beings,” she believes. And who would know that better than Chu! She was raised in Borneo and was one of 12 children in a very traditional family. What set her apart was her decision to leave home and move to Sydney, Australia, to complete her education.

At 18, two suitcases, 800 bucks, and an immensely brave decision brought Chu to one of the most expensive cities in the world. Needless to say, the struggles involved in finding her footing in Sydney were substantial. However, Chu never allowed that to hold her back. She had a successful career in the e-commerce industry in Sydney. However, she chose to leave the city where she built her career, and decided to move to the United States for career opportunities. She now lives in California, US, with her husband and two children while helping Emeritus bring quality education to millions of learners across the globe.

You can take a more detailed look at Jakii Chu’s career journey here.

“Take risks and don’t be afraid to fail. You need to know what role doesn’t fit you to be able to find the one that does fit you.”

It is often perceived that women are more risk-averse. However, stories about women in leadership like Jakii’s need to become a part of the popular narrative to change that perception and inspire more women. Chu is an advocate of taking risks, knowing that not all of them will pay off. If a risk does not give you the growth you desire, it will give you the learning that you can use to make more informed decisions in the future.

Chu speaks from experience as she has navigated many different roles in the beginning of her career to arrive at what drives her. “I like details and getting to solve problems,” she says, explaining what she looks for in a role. And that has helped her choose the profiles best suited for her. However, she firmly believes that you cannot understand what kind of roles work for you without taking up some that don’t.

Chu encourages young people at the beginning of their careers to take more risks because they usually pay off. If not, at least you know what you need to avoid in the future.

Chu being interviewed by her daughter Michelle

“Actively seek out mentors, supporters and alliances to trace your career path.”

Chu doesn’t hesitate to tell her daughter Michelle (and us by extension) that she wouldn’t be where she is without supporters and allies. She goes on to talk about how we must learn from others in our careers. Chu herself has found many such leaders in her journey who she respects immensely. These mentors have had a profound impact on her personally and professionally.

“You have to build your own personal board of directors,” says Chu. Life will throw challenges at you and a few crises too. In such trying times, having a set of people you can count on to give you the right advice is the best possible outcome. Disclaimer: be careful while choosing who you listen to; you must pick your board of advisors carefully to make sure you get sound advice when you need it the most.

The lesson here? Network with people, build strong working relationships, and learn from those you have identified as your mentors.

“Think of your career like a tool kit. Find the gaps and fill them with the right tools.”

If you concur with Chu’s perspective on your career and leadership, you are committing yourself to lifelong learning. “You have to continuously stretch yourself to do something you are not comfortable with or learn something you haven’t done before. To become a great leader is to learn continuously,” says Chu. In essence, to become a great leader, learn, learn, learn, and then learn some more. Additionally, don’t forget to unlearn things that have lost relevance. 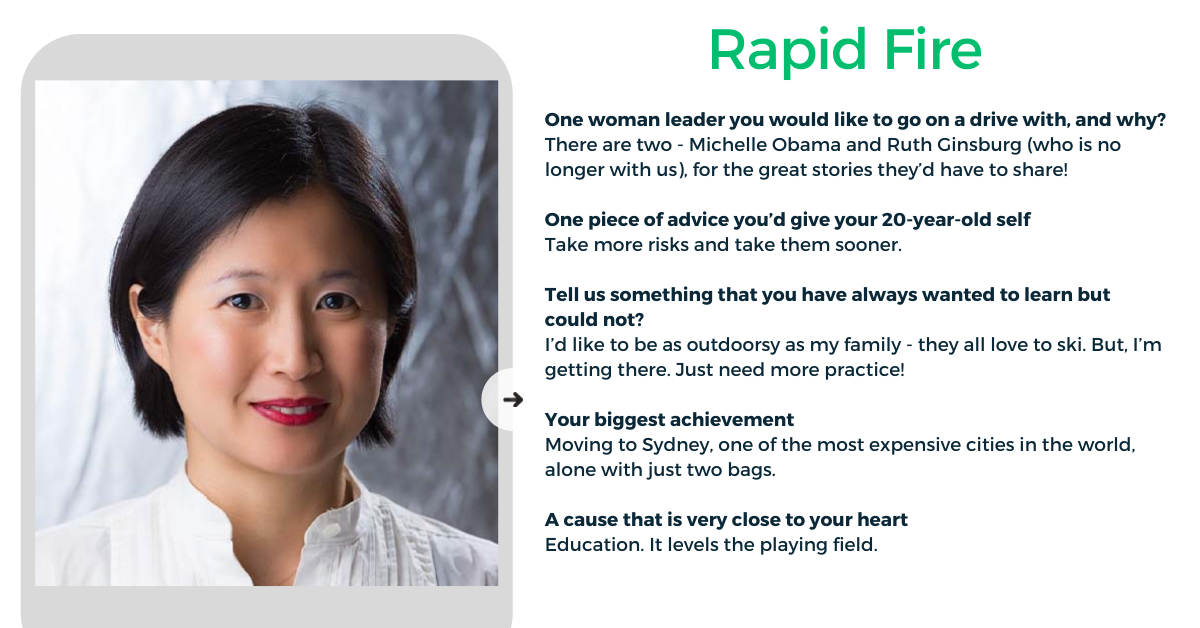 “English is not my first language. It is not even my second language.”

Speaking of the biggest barrier in her career growth, Chu called out how non-native English speakers struggle. “For the longest time, I was deeply conscious of not being able to speak or write perfect English,” she says. It might have been a perception but she was inclined to believe that she was not always being given the respect or consideration that she deserved because of the language barrier. This fear of judgment prevented her from speaking up on some occasions where she had something constructive to contribute.

This begs the obvious question: how did she get over this barrier? “I figured that my superiors did not hire me to speak perfect English. They hired me for my expertise and experience. So, I couldn’t care less if my English was perfect,” says Chu. In short, play to your strengths and you might find yourself among the best female leaders in the business!

“Workplaces have moved from unconscious biases to conscious biases. We are now aware that there is a bias so it gives us a fighting chance to change things.”

Michelle asks her mother if she has seen workplaces becoming more inclusive during her tenure as a one of the female leaders in the corporate world. “There is definitely more awareness about biases in all processes in an organization,” she says. This doesn’t imply that all gender stereotypes or biases have been rooted out completely. However, there is a consciousness about these issues, so they aren’t brushed under the rug anymore.

“Every time we recruit or do performance evaluations, we ask ourselves if it is fair and purely based on merit,” says Chu. There is a filter that is applied to every decision to check for biases, if any. And she believes that these checks to root out gender, race or age-related biases have become much more robust in the last decade than before.

“I like data. And data indicates that there is a bias when it comes promoting women, especially coloured women, to senior positions.”

Responding to her daughter’s question about the struggles female leaders face in the corporate world, Chu says that she wouldn’t want to generalize, but data indicates that there is a bias when it comes to women at the top positions. She went on to add that this could also be because there are fewer women as part of the workforce in certain industries. It also implies that there are fewer women to fill the leadership roles.

The solution? Chu feels that we need to work backwards and address the problem at its root. If we educate boys and girls without biases, allowing them to choose what they are best at, then the problem will solve itself. “For instance, if we encourage more girls to study coding instead of telling them that this is a field for men, we will have a huge supply of women coders in 20 years time,” she says. 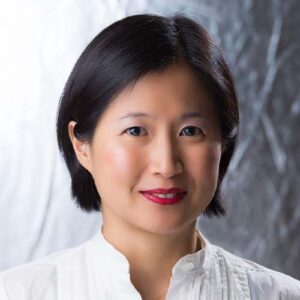 Moving away from her professional journey, Chu had some touching personal details about her adolescence to share. She explains to her daughter that she noticed a distinct difference in the way boys and girls were treated in her family early on. “For girls, if we were given education, it was considered a job done. But, the boys were groomed and taken into the family business. They had an inheritance, while the girls often had nothing,” says Chu.

This was one of the aspects of her early years that fueled her drive to become one of the select few female leaders in the industry today. Not succeeding was not a choice as there was no fallback option. This story and its message would resonate with several other women from Asian cultures who might have faced similar situations growing up. But the learning here is that you can turn even something negative like lack of male privilege to drive you.

“I want to make sure that girls are not told that they are second class or less deserving.”

Chu explaining to her daughter that girls are equal, “no more, no less” than boys is one of the most poignant moments in this interview series. She goes on to reiterate that gaining the confidence that comes with the knowledge of being equal is essential for every girl and woman. She points out, “It helps you make the choices that are right for you and your family. You should know that there are some skill sets that no one can take away from you.”

When you need confidence to make tough decisions, draw on your skills and education. Make sure you tell the next generation of women that they were born equal so they know to fight for what is theirs.

Watch this space for more conversations with inspirational female leaders like Jakii Chu! If you missed our chat with our Chief Learning Officer, Ashley Chiampo, catch it here.