The need to sort and label (things, concepts, people, etc.) is basically human. It is this need that gives us a sense of structure, but it also gives rise to stereotypes. If only the world were neatly divided into ‘creative’ and ‘technical’ people! But it isn’t, and Ashley Goldstein’s story shows us that it doesn’t have to be. Anyone can learn to code online with the right tools, even an art teacher who is the embodiment of what we would label as ‘creative’. Goldstein completed the
Professional Certificate in AR/VR Development and 3D Graphics program from NYU Tandon School of Engineering alongside her day job and moved into a new role as an augmented reality/extended reality (AR/XR) developer. All this in just seven months, which is the duration of the program.

So, are you still not sure if anyone can learn to code online? Let’s hear it from the artist’s mouth. 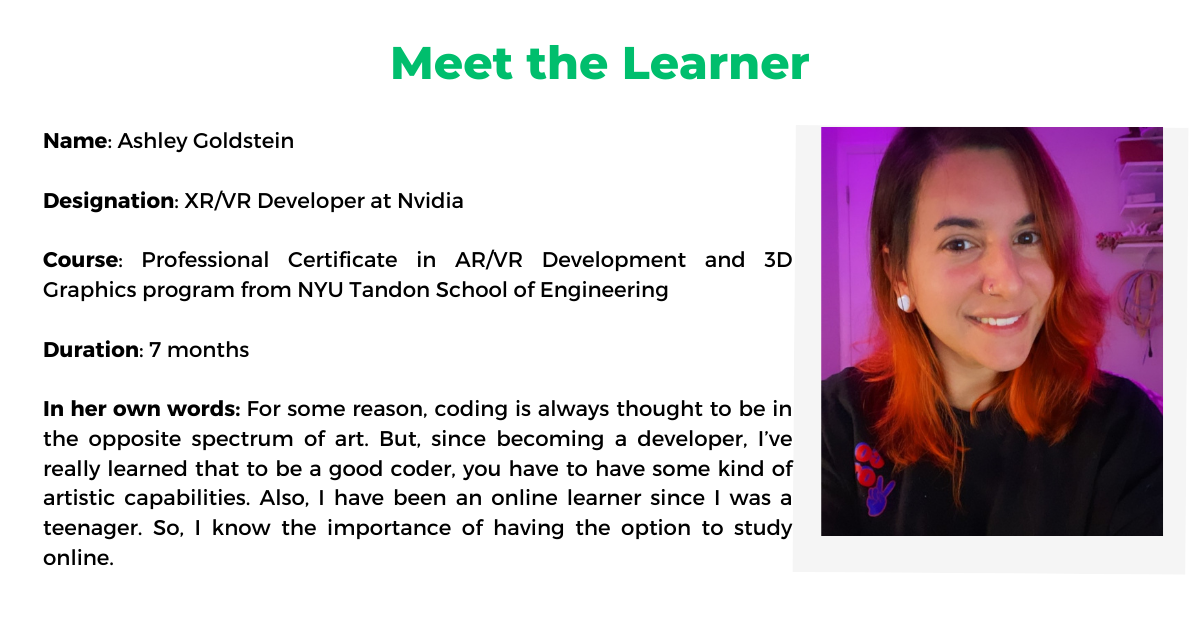 Teaching, art, and gaming — what is the connection?

“I am a secondary school art teacher; I have been teaching art to middle school students for the past four years,” she says, with her characteristic charm. But she didn’t study to be an art teacher or have any teaching ambitions, to begin with. “I have a bachelor’s degree in fine arts with a specialization in sculpture and photography,” she clarifies.

So, what is it that Goldstein wanted to do before she became a full-fledged XR developer? The answer is as interesting as we expected, and more. “I initially wanted to be a commercial photographer, then a commercial artist, and finally an art historian,” she explains. “I always knew that whatever I do, it will be creative for sure,” says Goldstein, who considers coding to be as creative as art.

Goldstein tells us that she did a professional development program with Unreal Engine. The program essentially centered around introducing game design to teachers. The idea was to facilitate teachers to learn and teach game design to their students. “I totally latched onto this opportunity and blew the project out of the park,” she exclaims. As a result, Unreal Engine invited her to be a volunteer for the summer.

“I worked on a project as a teacher, giving my commentary to students for financial literacy using XR,” says Goldstein. While this project did not involve any game development, she got introduced to XR, and that became a stepping-stone for her learning decision.

“I always wanted to go back to school and finish my master’s degree. And most of my colleagues had done their master’s degrees online. So, I started searching how to learn to code online as it had really caught my interest,” she explains. It was Googling that brought her to the Professional Certificate in AR/VR Development and 3D Graphics program from NYU Tandon School of Engineering on the Emeritus website. And her interest was piqued!

Did you have any second thoughts about going back to school to learn to code online?

We all Google things we’d like to do, which include vacations we would want to take, skills we’d like to pick up, and many others. But these get shelved in the absence of real intent and sometimes due to circumstances. So what tipped Goldstein over the threshold to a brighter future? She answers quite honestly: “I did sit on the decision for a while. But I spoke to some of my colleagues and friends, and they were so excited about the program as it would help me learn to code online.”

“Initially, I was worried about the amount of work I would have to put in,” she admits. But she quickly realized she would regret not doing the program if she let the opportunity pass. “After speaking to some great people in my circle, I enrolled within two weeks. I didn’t want another school year to end without making any progress on the professional goals I had set for myself,” explains Goldstein.

As a creative person, do you find coding to be aesthetically rewarding?

Do you recall any stereotypes about left-brained people being creative and right-brained people being calculative? Hold on to those stereotypes because Goldstein is about to quash them! According to her, codes are tools, just like brush and paint, that an artist can use to express herself. “Gaming is a very visual concept, and it has a lot to do with knowing the basics of design,” she replies.

“Coding has a role to play, but it has so much more to do with user experience. I think having an art background really helped me do well at this course and be creative with my projects,” she says without hesitation.

ALSO READ: The Rise, Fall, and Rise of Women in Coding Is a Story Worth Your Time! (featuring Ashley Goldstein)

You are saying that your art background was actually an advantage in your journey to learning to code?

“I think everything contributes to your knowledge of self. When I was in college, there were so many different subjects like ceramics that I took. I was the president of the Art History Club on campus. All of those experiences were meaningful,” explains Goldstein. But how did art help her hone her skills as an XR game developer?

“For some reason, coding is always thought to be in the opposite spectrum of art. But since becoming a developer, I’ve really learned that to be a good programmer, you have to have some kind of artistic capabilities,” she explains.

Did your work-life balance get disrupted when you added ‘study’ to the equation?

To that, Goldstein admits that learning to code online wasn’t a cakewalk. And there was some imbalance in her work-life balance. However, she says: “I don’t see it as an imbalance; it is more of an investment.” And that rings absolutely true for most learners. She goes on to say that she also knew that this extra work was short-term and would not be there forever. Hence, she did not feel overwhelmed at any point.

“Thankfully, I am a teacher, and we do get off early. So, I get more daylight hours to work with,” says Goldstein. But she also admits to burning the midnight oil on occasion to work on projects. However, she does not begrudge the late nights or the extra effort. “I feel that the homework I was doing was for the life I wanted to live later on, so it’s been fine by me,” she explains.

What part of the program you took was the most important for you, and what is your key takeaway(s) from it?

Just like everything else, Goldstein took a fresh approach to what this program had to offer. She didn’t focus on the visual elements of XR or the thrill of developing an aesthetic gaming setup. Instead, she emphasized pure code: “Understanding the concept behind the code was the biggest challenge and achievement for me in this program. Anyone can use assets and make a game look pretty, but writing a code that works is the real deal.”

She explains that XR is still at a nascent stage of development. So much fresh work is being done in this new field, and it is all dynamic and constantly evolving. For her, “troubleshooting or problem-solving is the most important skill that a developer can have.” And that is her main takeaway from the coding for beginners program.

“My learning outcomes have been met and then some more,” beams Goldstein. She reveals that she has been a coder for about a year. Thus, for her to perceive learning outcomes for this program in itself was abstract because she did not really know how to code before she began. “I knew some HTML but no C#. I had hoped to get one piece of work done for my portfolio so that I could show prospective employers. But I got quite an extensive portfolio, which I built during the course of this program,” she exclaims.

“I don’t want to be in my old age and regret not making decisions because I was too afraid, or I felt like I didn’t have the time. So, I have pushed myself very hard,” she adds, explaining that being self-motivated helps.

Have the new skills you picked up transpired into professional success?

There is a twinkle in her eye: “The career coaching at Emeritus told me to be active on LinkedIn and keep my resume up to date. And I took their advice very seriously,” says Goldstein. She was very active on LinkedIn during this program and kept pushing the projects she did for her coursework into GitHub.

Hold your breath, for now, comes the big news: “I was discovered by Nvidia; they loved my work and asked me to apply for a job. So, I did a five-hour interview with them, and they have offered me a position, which I start in June,” says a very excited Goldstein. “I could never have achieved this without learning to code online,” she adds.

How important was the online aspect of this program for you? 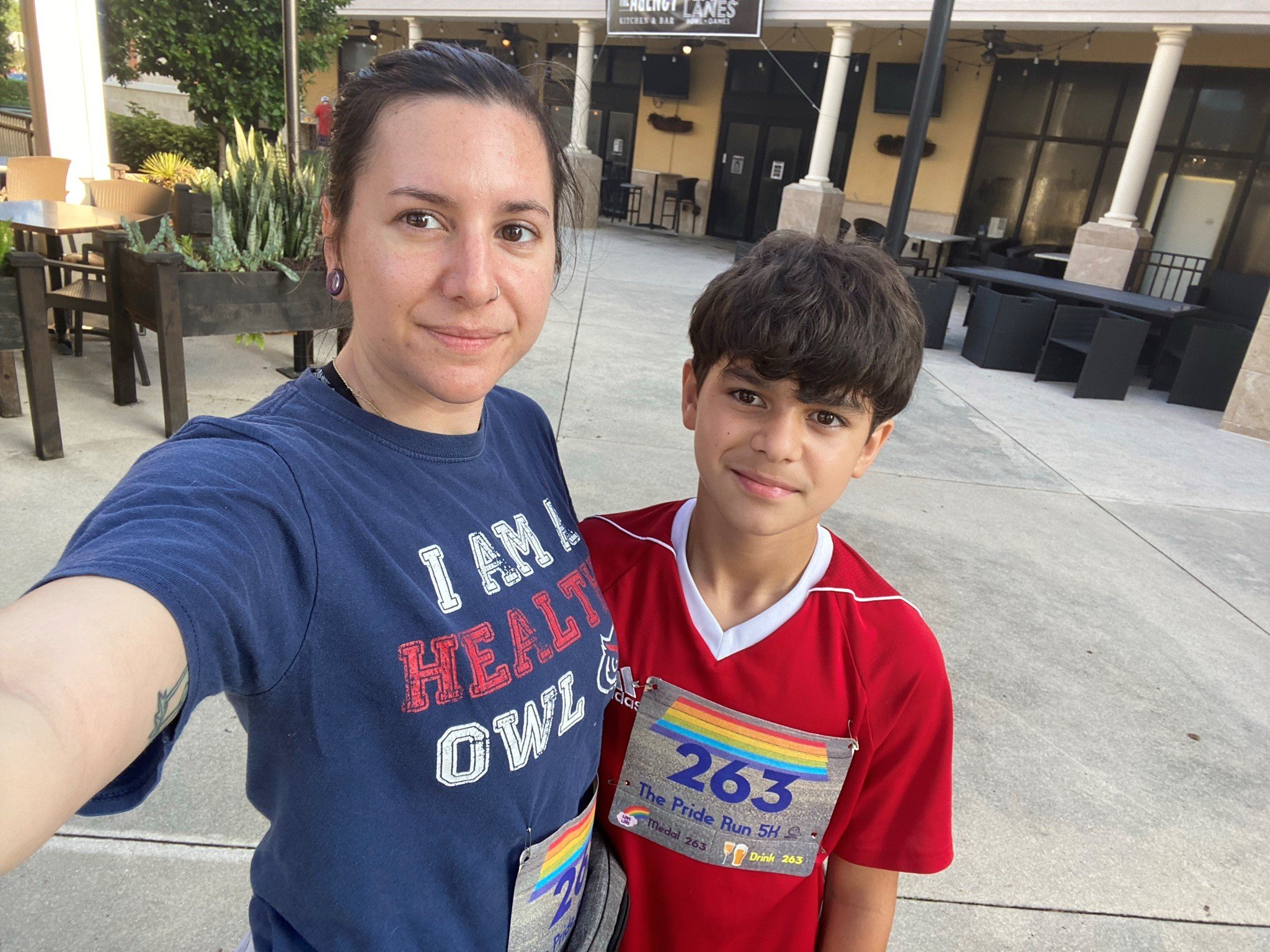 At this point, Goldstein tells us that she has a 13-year-old son. So, working, studying, and still being able to have dinner with her son was the “biggest selling point in favor of online education” for her. “If I had had to drive a couple of hours every week to campus and spend time attending classes there, I don’t think I could have done it,” says Goldstein, who is the first in her family to go to college.

She goes on to explain that she became a mother when she was still a teenager and had been an online learner while raising her son. “I am where I am today only because my school district offered the option of online classes. So, I know the importance of that option,” she says. And, at this point, the narrative shifts from being a learner’s success story to a story of human triumph against all odds.

Emeritus Careers affiliated with the Professional Certificates offers a complimentary and optional Career Development course to participants and helps them access additional, individualized career coaching and resume referrals to employer partners. We have partnered with organizations like TTEC to connect with prospective employers. Brands who are looking to reach out to great talent like Ashley Goldstein can learn more here.

Previous Post (p) What is Entrepreneurship? Everything You Need to Know
Share
Next Post (n) How Brands Can Provide the Best Customer Experiences in the Phygital World