Our world is full of information, implicit and explicit, often overloading our cognitive and sensory abilities at any given moment. Adding to this milieu is our current reality, constantly bombarded with new information and exigent changes. One often wonders whether we drive change or do changes drives us. In either situation, decision-making is complex, and the value of good decisions is predicated on the decision-maker’s ability to comprehend the problem and its many variables and respond swiftly and cohesively.

A skill like ‘Sense-Making’ provides a stimulus and temperament for assessment and reflection. Fundamentally, sense-making is not much different from ‘making sense’; it is the act of making sense of an environment, achieved by organising sense data until the environment “becomes sensible” or is understood well enough to enable reasonable decisions. In the decision-making process, it is one step before action. The concept of Sense-Making has been around since 1961. Over the years, it has been explored from the lens of creativity, information architecture, human-centred design and most significantly for organisations by Karl E. Weick (1995). It is today a relevant skill; the Institute of the Future, in its research paper on ‘future work skills’ lists sense-making as one of the top 10 skills of the future; and defines it simply as “the ability to determine the deeper meaning or significance of what is being expressed”. 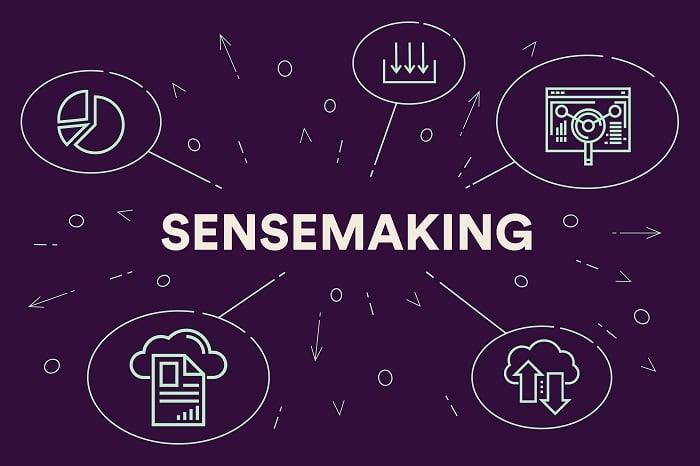 There is a phase of ‘synthesis’ in design thinking related to sense-making. All the gathered research, anecdotal evidence and contextual inferences are consolidated to a sensible whole, or wisdom, based on which further action can be taken. Sense-Making today is often called for in unpredictable situations that rarely have precedent. It is predicated on an individual’s ability to deconstruct and decipher valuable knowledge from existing information and extract unique insights critical to decision making. It helps key actors (leadership) of the process to draw out intelligence-based conclusions quickly. Which, when effectively communicated, allows the collective whole (organisation, followers) to respond to, through independent action. Here’s how:

Sense-making is reflective and predictive; an actor with a given frame of reference and a set of information tends to make sense of it based on past experiences and historical action to make meaning of the present. They will reflect on how such an event/situation came to be and what history tells us about it, and therefore in the present context, what it means. Based on this conclusion, future actions will be decided. An actor will predict or postulate desired outcomes to determine the best course of action to lead us to that outcome.

Sense-Making is highly contextual, i.e. it is dependent on the sense maker’s environment and the information generated within it. Given the same kind of data and stimuli, individuals with different world views will make sense of information in their own unique and different ways. And that is a good thing. Imagine a team of people bringing to the table a varied set of conclusions based on their spectrum of sensemaking.

Sense-Making provides what is plausible (E.Weick, 1995). The idea of predictive analysis is somewhat related here. It is stated that sensemaking helps with decision-making, which is an element of forecasting and speculating into the future. Based on current conclusions, what makes sense for the future? However, while these are imaginable, reasonable, believable, feasible predictions, it is still a fuzzy future.

We can hypothesise a future scenario to some degree of probability, but not accurately.

Sense-making seeks out hidden meaning based on explicit cues by deconstructing and contextualising presented information. The actor deciphers information and draws inferences even from fringe or weak signals, which prove their relevance in the time to come. A practised sense maker sieve essential cues for a given context and seeks to understand their significance in the larger scheme of things.

Sense-making is about connecting the dots and organising information.

When presented with a wide variety of unconnected, disparate data, the sensemaking process allows us to discover commonalities and patterns. Make tangential connections that may not be obvious. Still, when viewed through a particular contextual lens, they can be brought together and made functional, given a framework or structure that then begins to make sense.

The sense-making process works exceptionally well when done visually; it allows us to see all aspects laid out in front of us, helps us parse relevant information, organise sub-sets of information and provide the key to unlock the imagination. Some widely used visual tools are mind mapping, journey mapping, diagramming and infographics. For example, big data makes more sense when presented in a comprehensible information graphic chart. Similarly, sensemaking becomes more accessible when all information and knowledge is articulated; just imagine when you are trying a new food experiment. It helps to have all the ingredients in from us; the new recipe slowly forms and makes sense.

Design thinking is worldwide acknowledged as a creative way of solving problem. And the purpose is not simply to ‘look good’; it should achieve the business goals driving it. Adobe says that 71% of companies report creating 10 times the number of assets today than just a few years ago using design thinking. Upskill in this domain by enrolling in a design thinking course taught by world-class faculty members from top universities. Connect with us for more information.

Other Articles on Product Management

A GTM or go-to-market strategy is a comprehensive business plan that helps you to: Coordinate your message Develop an understanding of your ideal customers Position…

Sometimes, company owners or business leaders face difficulties while identifying the underlying reasons for a specific concern. But you can now use RCA or Root-Cause…

‘The key is not to prioritize what’s on your schedule but to schedule your products’– Stephen Covey. Have you ever heard about product prioritization? Well,…